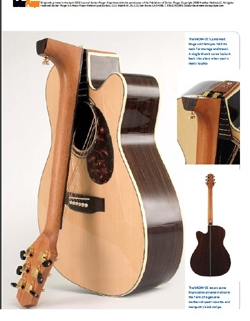 FOLDING GUITAR-MAKER VOYAGE-AIR’S CATCH phrase is, “Can your guitar do this?” If it did, I’d be in tears, so thankfully the company’s new VAOM-2C is here to do it instead. This guitar’s raison d’etre is to offer on-the-go players a hassle-free travel instrument that is also a real guitar when they get to their destination—not some low-volume mini-guitar or a kid-sized 6-string. I’m a cynic by nature, which I guess is the best predisposition for a product reviewer, and pointless guitar gizmos tend to irk me more than the run of general consumerisms, so I was prepared to rip the VAOM-2C all up and down the shop when I first approached the zippers on this thing’s admittedly rather large travel case. But you know, the major or immediate flaws just weren’t there. In short, right from the start, the neck folded into place, locked, and voila, I had a full-sized guitar in my hands.

The concept behind this hinged-neck guitar was developed by Harvey Leach and further refined by a team of luthiers headed by Voyage-Air’s Chief Operating Officer, Adrian Bagale. The range encompasses several models, from the VAOM-06 at $899 up to our VAOM-2C. The guitars are manufactured in China to Voyage-Air’s designs, and final inspection and setup is undertaken at the company’s Colfax, California, headquarters, where the patented hinge unit is also manufactured. Let’s first describe this guitar by ignoring the fact that it folds in half.

The VAOM-2C is a full-sized orchestra model (OM) with rounded cutaway, a solid Sitka spruce top, solid rosewood back and sides, and a depth of 4″ at the end block—a shade less than some
OM-sized guitars, but not significantly so. Its one-piece mahogany neck (at least that’s how it started) has a 25w ” scale length, and has been profiled to a slim but somewhat rounded C shape. The rosewood ’board carries medium-jumbo frets, 14 clear of the body, with a few more accessible thanks to the cutaway. The minimalistic “snakehead” style headstock sports unbranded gold-plated, die-cast tuners with ebonized buttons, and the traditional rosewood pin bridge holds a nicely cut compensated saddle made of genuine bone. As viewed through the soundhole, the internal workmanship is tidy, too.

The kerfing looks well applied, and there’s no glue slop in evidence anywhere. The top is supported by forward-shifted, scalloped X-bracing with a little extra reinforcement from some shallower struts that form a box around the soundhole.

The VAOM-2C is currently Voyage-Air’s top-of-the-line model, and its cosmetic appointments live up to that distinction. Elegant without being over the top, they include abalone fretboard inlays, four-ply binding around the body’s top and back, a two-ring soundhole rosette with a narrow inner band of mother-of-pearl, and a tidy piece of marquetry in the form of a decorative back strip.

Of course, further inspection of the neck shows us where the thing really goes wild, but for a guitar that embodies such a radical concept, the VAOM-2C really is pretty straightforward. The neck has been sliced cleanly and precisely in two just shy of the 14th fret from the face of the fretboard to the end of the heel, and a sturdy hinge unit, a guide pin, and a thumb-screwed bolt and nut have been set into the two separate pieces. The detailed instructions included with the instrument explain the process thoroughly, but in short, you really just fold the neck back, click it home (where a pre-locked setting in the hinge unit clicks it to, though won’t hold it against string tension), and twist the thumbwheel that doubles as the neck-heel strap button to tighten the appendage firmly into place. It’s all a little creepy before you get used to it, but hey—the first time I tried it, right out of the case, the system worked perfectly, and the guitar was even nearly in tune after its journey from West Coast to East for this review.  The only other quirk, another necessity of the design, is that in place of a traditional nut the VAOM-2C has a “zero fret” and a string retainer. The latter looks rather like a nut, but instead of slots it has narrow channels through which the strings pass, so they remain in place at the headstock when the neck is folded, rather than flopping around and getting twisted and tangled. Some players might be biased against zero frets, but they do provide an equal footing for open and fretted notes and chords, as regards both tone and action (since the speaking length ends at a fret in all cases), and the string retainer does seem an essential partner to the folding neck.

Any thorough review of this instrument also requires a discussion of the case, too, which is a rugged, padded affair with the dimensions of a medium-sized backpack. It has been very thoughtfully put together, with pads to hug the guitar’s waist to keep it snugly in place, a wide, soft, padded strap with neck cradle that Velcros in place so the guitar doesn’t fall out if you open the case in the wrong position, and a handy detachable laptop case to boot. Just slip on the shoulder straps and you’re a ramblin’ man; have guitar, will travel.

With the neck extended and locked into place, the VAOM-2C proves comfortable and playable and reveals no glaringly awkward residues of feel or tone resultant from its ability to fold in half. It yields a rich, balanced voice when attacked with a flatpick for either rhythm or lead work, with a firm, solid bass, sweet highs, and plenty of volume. Played fingerstyle, it’s still lively enough to pop out the notes, and it projects well even when you’re not laying into it. Overall, it’s a crisp, contemporary voice, and if it perhaps lacks a tad of the plummy depths of some high-end acoustics, it’s really not far off par for instruments in the $2k range, folding neck or otherwise.

Playability is very good overall. The few slightly sharp fret ends up toward the heel can most likely be attributed to the guitar’s arrival in a cold, dry part of the country mid-winter. The action gets a little higher around the 12th fret than I’d prefer, but it isn’t unreasonably so, and is correctable with a little shaving down of the saddle (the neck relief is optimum, so this isn’t a trussrod issue). The retaining nut with zero-fret works well enough, and tone doesn’t seem to suffer from this arrangement. However, the large channels through which the strings pass means there’s some “pinging” across the fret when you bend strings—the higher strings in particular, and especially down low. This is not so prominent a playing technique on an acoustic, perhaps, but one you’d like to have at your disposal.

All in all, though, the VAOM-2C is extremely well rendered, both as a travel instrument and as a guitar in general. So if you like the idea of a full-sized guitar that travels well, without the full-length case, this is certainly one to investigate.

Stories from the Road