I like to ride my Harley and I love Greece, especially Crete, so I traveled there for five weeks. Six days by Motorbike and ships from the north of Germany to one of the southern tip of Europe.

2016 I took a small travel-guitar but it wasn’t the same. It was not easy to tune and the sound of the small body was even “small”.

2017 I bought a Voyage Air VAMD-02. I changed the Inlay from the bridge from plastic to bone and I took stronger strings so the bass-sound becomes better. I wondered the volume by picking, “she’s” very loud although she has a light and small body. She’s very easy to play and stays in tune, makes a lot of fun.

I took the VA on top of my luggage, it was a really high tower. In Germany it rains very much so I must put the case in a plastic sack to make it water prove. After 2000 km over land and 1600 km over sea (3 nights on two ferry-boats) I arrived the south of Crete.

I lived in my tent a few weeks. And when I came from the tavern in the evening after a good meal and some beer or wine I took my guitar and played some songs. There were many stars to see or the full moon, some nights were very warm. And with just some more wine I could play and sing better and better. It’s amazing.

We had a lot of fun, my VA and me. And next Year we want to go there again – together. 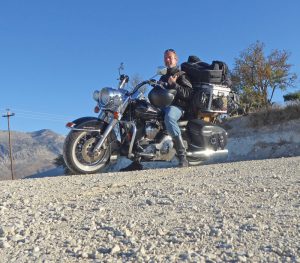 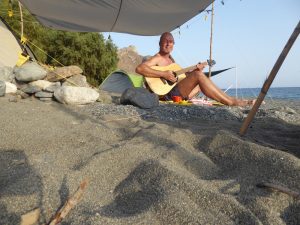 Stories from the Road

Jerry Kern talks about his VAD-06
Scroll to top